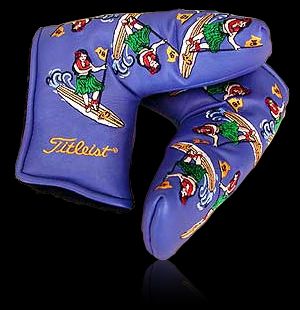 $124.66
To commemorate the start of the 2005 PGA Tour in Hawaii Scotty introduced his second hula girl headcover. As in 2004, Scotty kicked off the start of the PGA Tour seasons by placing a Hula Girl headcover in the lockers of the most loyal Cameron players. Imagine the surprise when they found a surfing Hula Girl in their locker! This cover, made in a limited run of 2005 to commemorate the year, features an expertly embroidered Hula Girl riding the blue waves of Hawaii. Scotty used 8 different colors to make this one of the coolest covers to come out of the Studio!

Value Details
Getting for sale items...
No items found for sale.
Listings from ebay